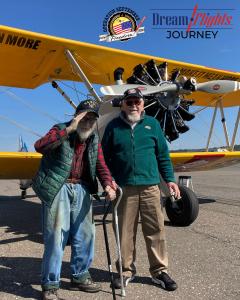 891 WWII heroes experienced the magic of a Dream Flight during Operation September Freedom, a 61-day national tour that landed in 333 cities and 47 states. 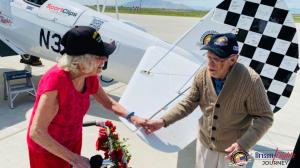 891 WWII heroes experienced the magic of a Dream Flight during Operation September Freedom, a 61-day national tour that landed in 333 cities and 47 states.

Dream Flights is a nonprofit dedicated to honoring the service, sacrifice and stories of America’s senior veterans by providing them with a life-changing experience: an open-air flight in the cockpit of one of Dream Flights’ fleet of fully restored WWII-e

Onboard Images’ Dream Flights Journey series captures the heart of Operation September Freedom and the hearts and stories of our American heroes, the men and women who served in World War II.”
— Darryl Fisher

Dream Flights Journey is a 20-episode series capturing the historic 61-day national barnstorming tour called Operation September Freedom (OSF). Launched by nonprofit Dream Flights on Aug. 1, 2021, OSF’s mission was to honor as many members of the ‘greatest generation’ as possible with flights of a lifetime in restored WWII-era biplanes, the same aircraft used to train aviators during World War II. When the tour concluded on Sept. 30, 2021, 891 World War II living in 333 cities and 47 states had soared through America’s blue skies in one of six open-cockpit biplanes.

According to Mark Magin, president of Onboard Images, he and fellow aviation videographer Angela Harris, traveled nationwide to capture the in-flight magic of Dream Flights and record the stories of our nation’s heroes, including members of the Devil’s Brigade Eril Coriela, Walter Boryca, and 100-year-old Eugene Gutierrez; 98-year-old Army veteran Leeland Chandler, and WWII hero James Shipley, a Tuskegee Airmen.

“Every veteran has a story to tell,” said Magin. “Some of those stories were inspiring; others were heart-wrenching. But every story reminded us that we live among aging heroes, and very soon, when this generation leaves us, so, too, will their stories.”

According to Darryl Fisher, Dream Flights’ founder, Operation September Freedom was the “nation’s last opportunity to actively recognize and honor the men and women whose sacrifice led to the Sept. 2, 1945 signing of the Japanese Instrument of Surrender, which effectively ended WWII.” Of the 16 million Americans who served in World War II, he said, only an estimated 100,000 remained at the start of Operation September Freedom.

“Honoring as many WWII heroes as possible was our primary mission,” said Fisher. “Just as important was listening to and preserving their stories for posterity. Onboard Images’ Dream Flights Journey series captures the heart of Operation September Freedom and the hearts and stories of our American heroes, the men and women who served in World War II.”
“Now, more than ever, it is necessary to celebrate video work that reflects the top tier of our industry, such as Onboard Images,” says Telly Awards Executive Director Sabrina Dridje. “This year ’s submissions reflect an industry that has returned to the important work of storytelling, one that has returned with a new perspective that values innovation, agility, equity, and tenacious creativity.”

Established in 1979, The Telly Awards receives over 12,000 entries from all 50 states and five continents. Entrants are judged by The Telly Awards Judging Council, an industry body of over 200 leading experts including advertising agencies, production companies, and major television networks, reflective of the multiscreen industry

About OnBoard Images
OnBoard Images is an award-winning video production company that specializes in aviation and airshow production. Established in 1998 by Mark A. Magin to offer contract onboard camera systems for motorsports, the company expanded its services to provide reliable in-cockpit camera systems in aviation production, in addition to all phases of production. OnBoard Images is a member of the Internation Council of Air Shows (ICAS) since 1999. In addition to receiving the Telly Award in the Silver Category (2022), Onboard Images also received the “Sword of Excellence,” the air show industry’s highest honor. OnBoard Images has contracted with ESPN, SPEED Channel, ABC, CBS, Discovery Channel and GEICO in its 25-year history. Contact [email protected] or call 727-421-9042 for more information.
—

CORAL GABLES MUSEUM TO PRESENT UKRAINE – MUSIC IN WARTIME: A JOURNEY THROUGH FILM AND MUSIC WITH HOBART EARLE