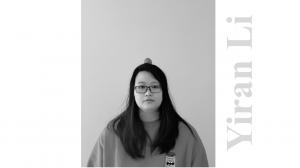 You will find the full interview with graphic designer Yiran Li in New York Art Life magazine. The new trends in graphic design through the latest technologies.

Always be original and authentic. Your work must always come from you, and nothing else.”
— Yiran Li , Graphic Designer

NEW YORK, NY, UNITED STATES, June 7, 2022 /EINPresswire.com/ — In the dynamic and extraordinary city of New York, we at Nyartlife Magazine are always looking for artists who contribute their talent to the greatness of this city ‘. It’s very exciting to feature an artist that works with different mediums when expressing themselves in various ways. Yiran Li is one of the great artists we are happy to introduce and bring attention to. You can read the integral interview on New York Art Life Magazine.

Yiran Li works across UX design, graphic design, and advertisement. Her work began with a long, extensive background in advertising the design. Yiran’s advertisements and design work shift from traditional media to new media. She has a great sense of bridging the gap between what defines different eras of advertisement and design, as she believes that advertising is capturing all the elements of time that have a strong sense of rhetoric and persuasion.

Yiran Li’s advertisements have appeared on newspapers, magazines, and billboards. Li’s work has been employed by advertising agencies within China, which have served many big brands that we all know. Some of these brands include HTC, Motorola, Dettol, Oreo, etc. Her designs have served HTC and Motorola’s flagship stores, capturing the eye of anyone who sees them. Li’s work has been very successful and eye-grabbing in Greater China. She mentions that she has “often see[n] my works on the streets of Beijing.”

Yiran Li has also enjoyed success by cooperating with a German design company for the Chinese version of Dettol product packaging. The packaging of these products were so successful and practical, that they are still in use and available in Asian supermarkets across Asia, and even in the United States. These great advertisements and product design successes led Yiran Li to one of her career highlights.

Li’s works have been selected for the IAI Advertising Works and Digital Marketing Yearbook many times. This is a book that represents award-winning works within the highest level of advertising in China, as well as being a renowned international creativity award. It is an excellent highlight for anyone’s career as it is part of the history of advertising in China, and the annual yearbook is even held in a large library where visitors can read about the most successful artists who’ve made it each year. Yiran Li was honored the bronze award. She considers this one of her highest achievements, as she was honored to be named among many people who inspired her, and those she still looks up to in the world of design and advertisement.

Yiran continues to work on her multimedia designs and advertising works by believing in herself the way she wishes to be. Her signature style is having childlike illustrations and a sense of humor. She’s also committed to including a combination of handmade materials and digital technology.

Yiran Li relies heavily on having a unique art style. She believes that the composite effect of multiple material media is significant. While working in advertisement and creating her two-dimensional and three-dimensional designs, she is also a photographer. She uses her lens to record life and to further broaden the boundaries of her visual technology, as she explains herself. She also knows that photography will assist her in finding more design inspiration, and elements that will become part of her work as being a photography requires a strong vision. In turn, that strong vision will assist a designer in finding new things in one’s environment that will be eye-catching and influential in their area of expertise, whether it is a movie poster or an advertisement for a futuristic electronic company.

How innovative can software districts impact the yachting industry

SW is celebrated as a finalist on the Green and... END_OF_DOCUMENT_TOKEN_TO_BE_REPLACED