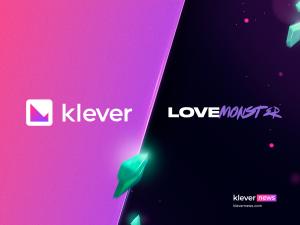 CAPE TOWN, WESTERN CAPE , SOUTH AFRICA, June 15, 2022 /EINPresswire.com/ — Love Monster has been on Klever‘s radar since its launch, and they decided to establish an official partnership after meeting in person and discussing its plans as well as the potential benefits that the Klever Ecosystem and Blockchain (KleverChain) could provide.

Thanks to the Klever blockchain brains and developers, the Love Monster team could focus on their projects, designs, and game development needs.

By accessing a core team at Klever, they can develop new gaming and blockchain synergies and access new possibilities that will significantly enhance Love Monster and KleverChain’s capabilities. Love Monster goes beyond their imagination, passion, and drive.

Love Monster is the brainchild of Liam Love, CEO, and Founder. Liam has been designing and developing mobile games for over a decade and has released several #1 mobile apps. However, his true passion is creating new, innovative, memorable experiences no one has played before, and that is the primary goal of the Love Monsters mobile game.

Love Monster is where users can enjoy their adventures in the Monsterverse (metaverse) and earn money as a reward while playing the game. In the future, users will be able to play this free-to-play mobile game on any Android, or iOS mobile device, all underpinned by the Klever blockchain technology.

In the game, players assume the role of adventurers until one day they wake up in the “Monsterverse” filled with love monsters, 9,999 to be precise.

Love Monster NFTs go way beyond standard NFTs that prove users own a collectible item. In contrast to traditional gaming, where the game company owns all of the avatars and skins in-game, with Love Monster and KleverChain, users now own all of their monsters so that they can sell them for real money on the marketplace.

$LMT (Love Monster Token) is a utility coin used by the game and for its ecosystem. It’s not the regular in-game currency! The tokens exist in the real world too.

In the Love Monster NFT game, users can use $LMT to finance all kinds of transactions, from purchasing characters from the market to buying game resources and breeding and improving characters.

On the KleverChain, LMT is a cryptocurrency that can be exchanged for other cryptocurrencies, staked to earn APRs of 16%, traded on exchanges, and much more. With blockchain, developers need experts! Together, Love Monster and Klever, one of the leading names in the crypto and blockchain industries, will collaborate through KleverLabs.

Klever showcases its blockchain ecosystem on a Time Square billboard

Democratizing Healthcare Defining the home as a setting of care... END_OF_DOCUMENT_TOKEN_TO_BE_REPLACED