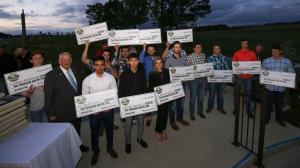 It’s rare to find scholarships specifically targeted towards students wanting to pursue careers in construction – and it’s even more rare to see them being given with such a generous sum of money.”
— Terry Flowers, Teacher, Fannin County High School

Benefitting the area’s local youth through the Parade of Homes Scholarship Foundation, Blue Ridge Parade of Homes is an annual, three-day event held in North Georgia and features amazing homes sprinkled throughout the North Georgia mountains. The event has drawn more than 8,000 attendees from 31 different states in its first three years, featuring 48 homes by eight of the region’s most prominent builders including Don Clement, Travis Coleman, Ron Lomonaco, Marc Nicholson, Buzz Quintrell, Keith Sumner, Kevin Teague, and Tommy Wosyluk. The event has quickly established a tradition of showcasing a variety of spectacular homes and introducing exciting new home-building trends to attendees from all over the country.

At its foundation, the mission of the Blue Ridge Mountains Parade of Homes and its sponsors is to give back to the community. With many of the participating builders being raised in the local area, the non-profit Scholarship Foundation is committed to giving back to public education in the North Georgia area, by way of providing scholarships to local students who plan to enter the construction field after graduation.

Several scholarship recipients from previous years were on hand at this year’s banquet, serving as ambassadors for the program and helping distribute awards to this year’s award-winners. Norma Solis, a first-year scholarship recipient shared with attendees, “It’s always a special treat to come back and participate in the annual banquet. I know the impact it’s had on my life and it’s so exciting to see the next group of students have an opportunity to share that same experience.” Solis, now a Junior at Kennesaw State University, is pursuing a career in architecture and construction management.

This year’s scholarship awards featured an $80,000 increase over last year’s awards, thanks in large part to the generous contributions from local businesses who helped sponsor the 2021 annual Parade of Homes event. “Without the help from our local businesses, we simply would not be able to give back to the community the way we have,” said event founder Keith Sumner. “It’s been absolutely incredible to see everyone come together and collectively contribute towards this amazing cause. It’s a perfect example of what can be accomplished when everyone shares the same mission, goals, and vision.”

Terry Flowers, now in his third year of being involved with the Scholarship Foundation, was particularly instrumental in helping spread the word about the opportunity at his school. “This type of scholarship in the district is truly unprecedented,” said Flowers. “It’s rare to find scholarships specifically targeted towards students wanting to pursue careers in residential and commercial construction – and it’s even more rare to see them being given with such a generous sum of money.”

Planning is ongoing for the 2022 Blue Ridge Parade of Homes event, being held September 30 – October 2, with committee members meeting each week to discuss plans for the upcoming parade. One notable change will include an exciting, first-time collaboration between students and builders, resulting in the construction of a home that will be featured for auction in this year’s parade. Marc Nicholson, one of the eight builders and founding members commented, “We’re incredibly excited about working with the students on this project. It not only gives the students an opportunity to get hands-on, real-life experience, but also puts the Scholarship Foundation in a position to award even more scholarships to deserving students next year. This will be a true game-changer for us.”

About Blue Ridge Mountains Parade of Homes
The Blue Ridge Parade of Homes is an annual, three-day event held in Blue Ridge, Georgia. Inspired to give back to the community through the support of local schools, the organization operates as a non-profit, providing high school students better educational opportunities through the Parade of Homes Scholarship Foundation. A significant portion of all ticket sales goes back to students in the form of scholarships designed to support those who want to enter construction trade after high school.

Learn more about the Blue Ridge Mountains Parade of Homes by visiting:
http://www.blueridgeparadeofhomes.com/.

A large number of Iranians gathered outside a Stockholm courthouse... END_OF_DOCUMENT_TOKEN_TO_BE_REPLACED

Spaceship with refugees from Earth slips into Jupiter orbit in... END_OF_DOCUMENT_TOKEN_TO_BE_REPLACED

Learn to leave compulsion behind and lead a life of... END_OF_DOCUMENT_TOKEN_TO_BE_REPLACED

North America is expected to offer lucrative opportunities to the... END_OF_DOCUMENT_TOKEN_TO_BE_REPLACED